Ruin Your Enemies Day with These 8 Anonymous Prank Gifts Do you have an old high school rival? A coworker you're constantly competing with? Perhaps your mother-in-law tried to ruin your wedding day? On any other day, you might be able to look past how utterly annoying and frustrating these people are. Today is not that day. Today you seek revenge; you don't want to harm them; you just want to ruin their day.

An anonymous prank gift mailed to your enemy is the best option! But will you ship it to their house or office? It's a vital consideration if you want revenge enough to embarrass them publicly. If you're on the internet searching for prank gift ideas, it's safe to say they must have done something pretty awful.

It's also easy to assume that you avoid confrontation like the plague. Anonymous gag gifts are the easiest way to get your revenge without conflict. It's a worry-free act of defiance!

Below is a list of the best 8 anonymous prank gifts currently on the market. Whether you're looking to send someone anonymous underwear or a literal box of crap, this list has the right prank gag gift for you. Sending your enemy shit is the most obvious and effective way to exact revenge. Not only are they going to be disgusted, especially if they end up touching it or even doing a taste test! Shitexpress sends a box of wet animal poop worldwide for just 16.35. If you're not feeling petty enough to send a natural animal poop prank gift, you can also send a chocolate one that says, "Eat Shit" at Dick at Your Door for 19.99. Smell my Thongs, the original Used Thong Prank Envelope, sends an envelope with a label reading "Smell my thong," giving the illusion the recipient ordered a used thong! This embarrassing prank also allows you to slip in a message; even if you want to stay anonymous, you may still want to write down something mean or humiliating. This prank is best delivered to an office or place of work so that when the mailman hands this to the recipient in a crowded room, they are sure to be mortified for weeks, perhaps never regaining the reputation they once had. Fully anonymous, for 13.00, so you can have the revenge you have always wanted.

Spider in a Box Is your enemy an arachnophobe? Do they always make you kill the office spider, and you've finally had enough? Sending this to them in the mail or simply leaving it on their desk is sure to give them a scare and perhaps a mini-heart attack. Embarrassed from their over-the-top reaction to such a small prank, your enemy might start helping with spider control around the office, or at least stop asking you. That is if they can take the hint. For only 18.99, this prank is worth it to see the look on their face. Perhaps the pettiest prank on the list is the Empty Birthday Gift Card. We've all had the experience of being given a faulty gift card before. The humiliation and embarrassment you feel as it keeps declining is only second to worst than when your actual bank card gets declined. You may not witness the shame the recipients feel when they try to use it, but you can rest assured they felt humiliated. The birthday card itself is sent anonymously, of course, so you can sit back and laugh at their shame for only 9.50. Whether this special, deserving dickhead receives this gift at work or at home, they are sure to feel humiliated by what they've done to be served such an award. Just envision the horror on their wife's face as he cracks this open at the dinner table near the kids. He'll have to explain away what he could have done to deserve this or make up a story about how it's a prank. He'll still have the agony of going over every sick thing he's done in his life to deserve this. This priceless revenge piece is only $16.99. 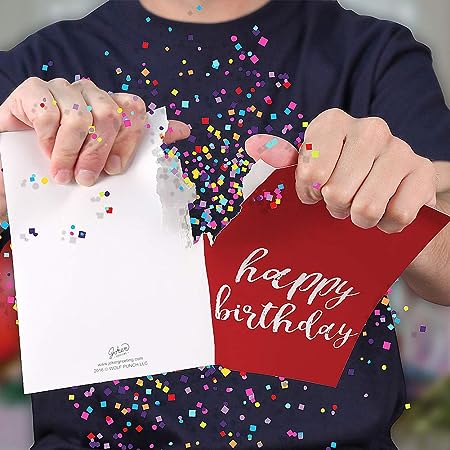 With a self-explanatory name, this card is guaranteed to not stop playing music for 5 hours! Having this shipped to your enemy's workplace will be a guarantee to not only humiliate and embarrass the recipient it will also piss off all their coworkers. If they decide to rip open the card to destroy it, they'll encounter a glitter bomb. A double whammy, ringing ears for days and a dry cleaning bill. The perfect gift for ultimate public shame, send this card anonymously for only 18.29. This prank is for the time your enemy has gone too far, and you want them to feel personally victimized. Send them crabs, you heard me, for the steep price of $187; you can anonymously send someone public lice. Yes, it is legal! "Itchy justice awaits" is the perfect slogan for this company. While this may sound like an extreme prank to some, others would argue that some people are just asking for it and sending them an itch-inducing strain of crabs will put a smile back on your face.

This list of funny gag gifts is sure to give you tons of inspiration for when your enemy has gone too far. Buy one today and wait for the sweet satisfaction of revenge to roll in.